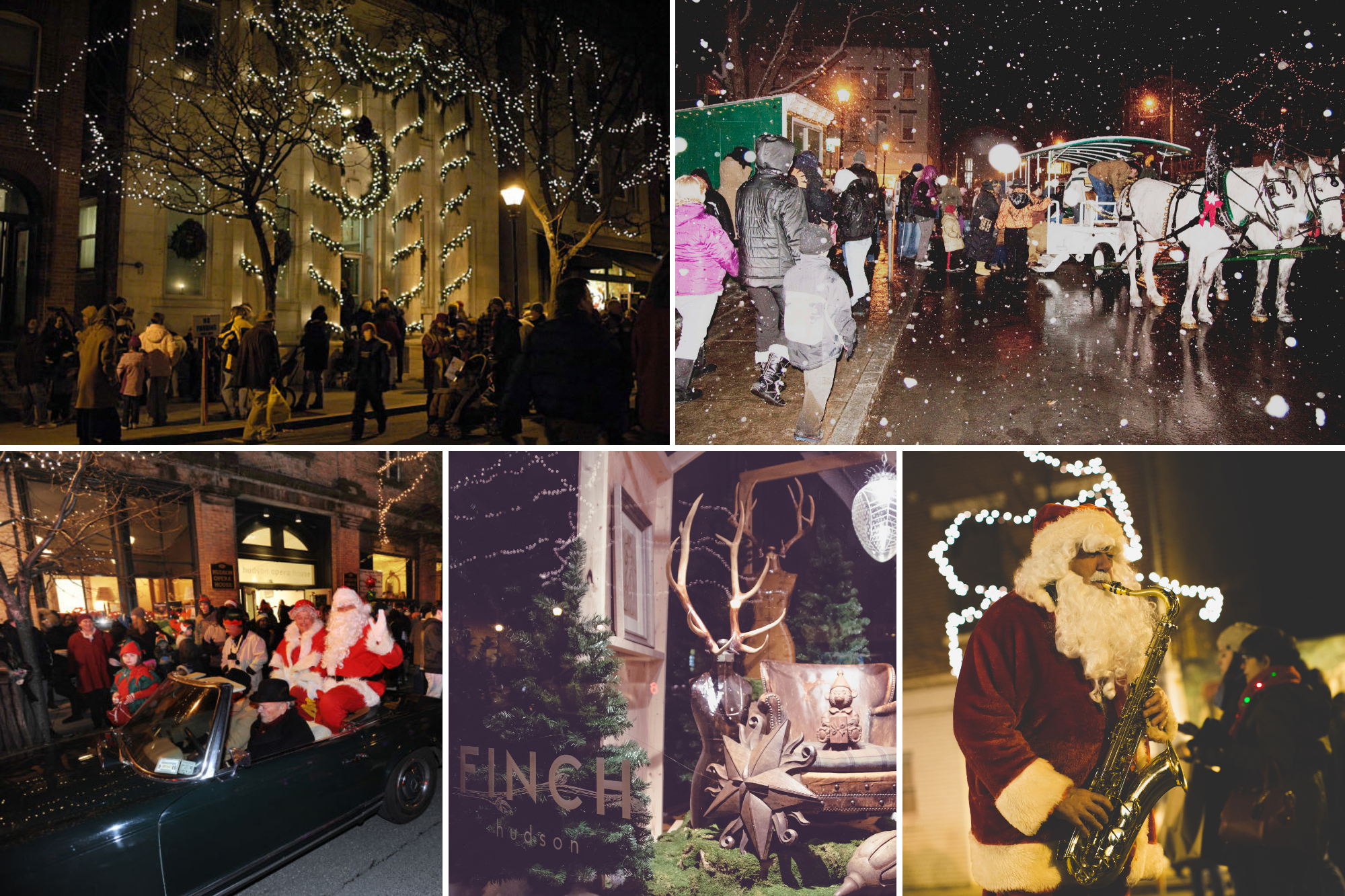 Winter Walk started in 1997 as a community event. The antique stores had moved onto Warren Street and it was felt that it would be a friendly gesture if shops would stay open, offering refreshments and entertainment. The whole scheme was hatched in Carole Clark’s restaurant, Charleston (now Baba Louie’s) where choreographer Abby Lappen’s dance company had staged an imaginative dance performance. From the first year, Abby’s dancers appeared in windows on Warren Street to the delight of children and adults.

Winter Walk was an instant success. Mayor Rick Scalera played Santa Claus. A beautiful horse and carriage clip-clopped up the street as just the right amount of snow fell. Antique dealer Byrne Fone dressed as Charles Dickens and read “A Christmas Carol” in his shop window. Saxophone Santa suddenly appeared from out of nowhere. Everyone seemed to join in the spirit of the season. Best of all, it reminded people of the time when all the stores on Warren Street were open on Thursday nights, and some likened it to “a high school reunion” where they saw people they hadn’t seen in years. That feeling of “community” still remains until this day, even though visitors from outside the County have swelled the ranks.

The first Winter Walk took place mostly in the 500 and 600 block. It was called “A Winter Walk on Warren Street.” It was hard to get the crowd to move below Fifth Street or above Seventh Street. But as the business district grew, expanding up and down Warren Street, over to Columbia and into the side streets, Winter Walk grew with it. The name of the event was shortened from “A Winter Walk on Warren Street” to “Winter Walk,” reflecting this growth, and making the name more inclusive. It was at this point that tourists and visitors from outside the region started to come. They seemed to like the combination of a small town celebration and the quirky and surprising entertainment that was offered. The star of the show, however, has always been the street itself—a mile-long parade of beautiful buildings beautifully decorated. And people seem to like walking down that street with a friendly crowd of people.

As the crowds got bigger, shops were overwhelmed with visitors, and efforts have been made to place more entertainment outside on the street. Also, entertainment that used to appear in empty stores, or in shop windows, has had to move outside due to lack of available spaces.

For a number of years, it was difficult, if not impossible, to get Winter Walkers to go below Third Street. The formation of the BeLo3rd organization had a lot to do with the development below Third Street, which is now populated with all kinds of businesses. Warren Street above Seventh Street is also now developing and changing at a rapid rate.

Winter Walk is now almost seen as a holiday. It has turned into a destination. Many parties and family gatherings are built around Winter Walk. B&Bs fill up that weekend, etc.

Winter Walk is weather dependent. It has been postponed only once, due to a monumental blizzard on the day of Winter Walk. Temperatures have varied from frigid to almost 60 degrees. In spite of the weather, some people take pride in saying that they have been to every Winter Walk.

Winter Walk is, as it has always been, produced by the Hudson Opera House as a community event, with the added purpose of promoting business. From the beginning, other community organizations, public school art and music departments, the City Fire, Police and Public Works departments, and individual volunteers have participated and made it all possible.

Any cookies that may not be particularly necessary for the website to function and is used specifically to collect user personal data via analytics, ads, other embedded contents are termed as non-necessary cookies. It is mandatory to procure user consent prior to running these cookies on your website.